Fantastic! That’s how I feel about my recent trip to Toronto, whose purpose was to attend The MicroCap Conference. This conference was all about the tiniest of publicly traded companies (sometimes referred to as penny stocks). What really struck me about this gathering, was the unobstructed access to the CEOs in charge, and often times they were eager to speak to any individual investor no matter how small. On the other hand, sometimes the most eager CEO is the one who’s looking to raise additional capital, diluting existing shareholders. Nonetheless, there are insights to be gleaned by sitting down face-to-face and asking any question that you can think of.

In addition to getting face time with small companies, I also had the pleasure of meeting many interesting Canadians. What’s great about these interactions is that they aren’t trying to pitch an idea or sell their company – which makes them a bit more genuine in my opinion. Plus, they tend to want to share their investment ideas, which can be a good place to start further research. I was particularly excited to speak with Tobias Carlisle (albeit briefly). Tobias gave a presentation about his research in Quantitative Value and his development of the metric he refers to as the Acquirer’s Multiple, which is described in detail in his book Deep Value. 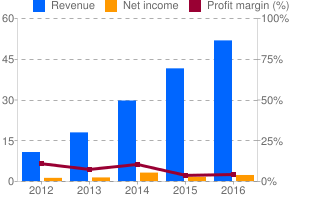 My day was jam packed with one-on-ones with various companies. Although I met with many different companies, there were a couple that stood out to me as companies I would want to own. The first one is XPEL Technologies, a maker and installer of automotive paint protection films for cars and trucks. Although their stock trades on the TSX Venture exchange, the company is actually headquartered in San Antonio, TX. They have demonstrated impressive top-line revenue growth of 40% over past few years. Most notably, they are profitable. There seems to be lots of runway to grow left for this company both domestically and internationally, and total market pentration ratios are quite low. They are currently trading for less than 1x sales, which seems like a decent valuation to me given the opportunity for future growth.

I also like Pioneering Technologies, which also has an impressive track record as well, with a massive 69% revenue growth rate from 2013-2016. They turned profitable in 2015, and now have more than 2 years of profitability. However, with a market capitalization as I write this of about $50M, it seems a bit too expensive to invest. I will be continuing to watch and wait for a lower entry price.

To sum up the conference, I will say it was a fabulous experience. I would highly encourage any investor interested in getting into the micro-cap space to attend one of these (they are free for investors). I am looking forward to attending the next MicroCap Conference, which will be held in NYC on October 5th.